Lobster & Lamb on the Menu

Posted on December 12, 2010 by alzheimerswife

Last Friday was Bo’s official “birthday dinner.”  Every year we get together with our friends Pamela and Mike and hire a chef who cooks a special dinner.  We meet at their place in Philadelphia,  dress in our best (men in tuxedos) and have an incredible evening.

Chef Bobby has a list of all of Bo’s favorites (as well as what he doesn’t like –primarily  the cabbage family)  and he plans a 7 or 8 course dinner.  The four of us  enjoy having each course introduced and explained.

I knew I was on shaky ground with Bo’s recent history of backing out of social events a couple of hours before they’re scheduled.  I reminded him each day the week before,  knowing he probably would forget; there was a chance he’d remember.  And he did. But on Thursday he mixed up his days, and about 3:30 he called me upstairs to say that he couldn’t go,  he didn’t feel “well.”  He was relieved when I told him it was the next day.

I put the information on our daily calendar and on the white board on the kitchen table so he’d see it all day Friday. I was holding my breath.  About 3:30 my friend Betty called, beginning with, “Is he going?”  “I hope so,”  I said, “but it’s still touch and go. I’ll call you.”  We were scheduled to leave at 6:15.

In the 48 years of our marriage, I’ve never purchased Bo’s clothes,   set out an outfit for him to wear,  or in any way prepared his clothes for the evening.  But this time,  I did.  I knew wearing his tux would be the easiest of all because there’s no question of matching anything or making decisions.  So I got it out,  ironed a new tux shirt,  found his cuff links,  and was ready to lay everything on the bed while he took his shower.  I hung his top coat near the front door, gloves and scarf in the pockets.

This time I decided I would brook no hesitations.  So I said, “Just take a shower, honey,  then take a nap and you’ll be fine.  I’ll have everything ready for you.  You know what a nice evening we’ll have.  You love to be with Pamela and Michael.”

He followed my suggestion, although slowly.  I find that not only does he do things more slowly,  he also dawdles over things.  After a bit of prodding, he got into the shower, I laid everything out and called Betty.  “I think we might make it.”  When he was finished,  I finally convinced him to lie on the bed for a while.

It worked.  I helped him get dressed, put in the studs and  tied the bowtie and he was ready.  We actually left the house 5 minutes early.  I drove,  as I usually do now,  and we arrived at their door at 7 pm,  Bo in a good mood.

He was his old self all evening.  The only sign of his Alzheimer’s was the questions that he asked more than one time.  He is starting to forget things that he readily recognized,  maybe even enjoyed eating, and certainly knew the name of before.  When we had a slice of kiwi on an appetizer,  he asked what it was and said he’d never eaten that before.  The food was spectacular (menu below)  and Boris ate with gusto – my extras too.  It was the first time I’ve seen him eat like that in months.  We actually stayed later than usual, talking and laughing,  before we walked back to the parking garage and came home. 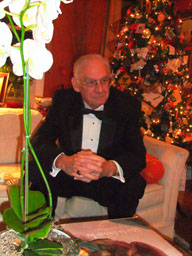 This entry was posted in Uncategorized. Bookmark the permalink.

6 Responses to Lobster & Lamb on the Menu

“Weeds are flowers, too, once you get to know them.”

Chemo with a Side of Barn

ideas that are dear to my heart.

read about our adventures in Canada

The world through my lens.....

Inspiration and tools for better blogging from WordPress.com

My Dad Is A Goldfish

Caring for a demented dad

Just a little about everything that comes to mind. And maybe me.

The Art and Craft of Blogging

Stitchin' together words and quilts.

A View From My Summerhouse

Coping with a Cognitively Impaired Spouse

The latest news on WordPress.com and the WordPress community.