This blog is about my vacation, but it’s not my story; it’s Emma dog’s story. She’s wonderful, our family’s joy. She’s………amazing. 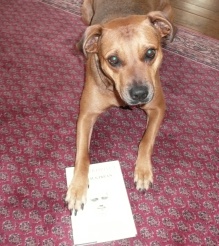 While I was in Paris,   Jon had the double duty of both day and night care. We hired outside help for three nights, but all the other time Jon cared for his two school-age children, for Boris, Emma dog and  Charlie cat. A Herculean task.  Bo requires 24-hour care by himself.

I was gone four days when  Jon called to tell me the story.

He said that the night before he had been totally exhausted; it was three am and he decided to try to get a few hours of sleep.  Bo was snoring in his own bed on the second floor with Emma beside him, so Jon slipped down to his room in the basement to sleep until six am when he would awaken the children  to get ready for school.

But about 5 am,  Emma came down to him (she rarely goes to the basement) and barked by the bed to wake him up.  Jon’s thought was that she needed to go outside; she has been known to bark to awaken me if she has an emergency.  So he jumped up to follow her, but she didn’t stop at the door on the first floor. Instead,  she continued straight up to the second floor  bedroom where Jon found Bo wandering around, confused.

We know that Emma is concerned about Bo.  Twice he fell and each time Emma became excited, then sat and shook beside him.  She becomes upset if we are massaging his back and he makes an unusual noise.  She tries to get between us if we hug, and she wants to be a part of it.

But this was different.  Emma knew that he needed help and she knew where to get it.  She was taking care of her buddy.

I’m Here for You

(You can subscribe to this blog and receive email notification when a new entry is posted. Just click on “Follow Blog by Email” in the right hand column.)

11 Responses to A Single Bark

“Weeds are flowers, too, once you get to know them.”

Chemo with a Side of Barn

ideas that are dear to my heart.

read about our adventures in Canada

The world through my lens.....

Inspiration and tools for better blogging from WordPress.com

My Dad Is A Goldfish

Caring for a demented dad

Just a little about everything that comes to mind. And maybe me.

The Art and Craft of Blogging

Stitchin' together words and quilts.

A View From My Summerhouse

Coping with a Cognitively Impaired Spouse

With God as my witness